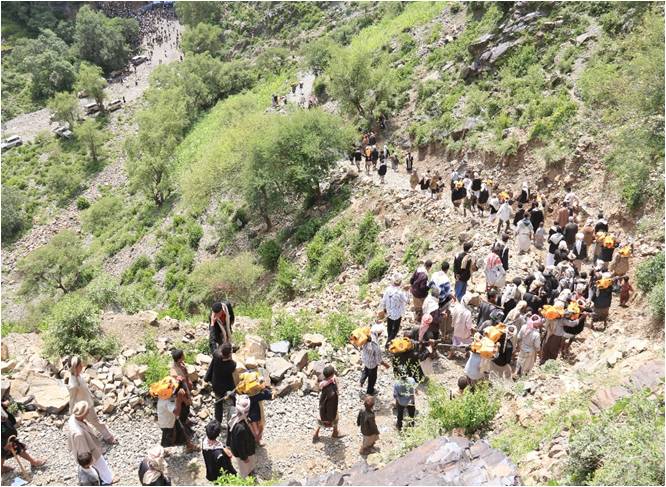 Article is available in: http://blogs.worldbank.org/arabvoices/youth-volunteers-yemen-provide-hope-during-conflict

Even before the protractive conflict, implementing development projects in some of the most remote and disadvantaged districts in a number of Yemeni governorates faced significant challenges. To address these challenges, and overcome some of the problems related to access to these remote areas, Yemen’sSocial Fund for Development (SFD)devised a program in 2004 to attract young interested in volunteering to promote development. In its first phase, this program - known as “Rural Advocates Working for Development (RAWFD)”- targeted number of male and female students from these remote areas and provided them with development-related program while they are attending universities in major cities. After graduation, these young graduates made a big difference in facilitating SFDoperations and activities of other national and international organizations in their home areas.

The first wave of young people in the RAWFD program played an important role as development ambassadors,by informing their communities of the benefits of the various development programs being launched in their areas. Specifically, they were hired by SFD to apply the “participatory learning and action approach (PLA)” in their communities, and formed/trained local committees to monitor various projects in education, health water, and other key sectors.In addition, they helped establish village cooperationcouncils (VCCs), which led to a number ofself-help initiatives to revive and leverage the social capital historical heritage of these areas to build up their communal local assets.

Amid the current crisis in Yemen, especially after the intensification of armed conflict in early 2015, the RAWFD program has continued to operate and even expand, as training programs were diversified to include development tools in the context of conflict. Youth from urban areas were included to the RAWFD program and its name was changed to “Rural & Urban Advocates Working for Development”.

The program continued to provide training courses in the morning covering the main concepts and principles of development.In addition, the program introduced an evening course on computer training. Through the Emergency Crisis Response Project financed by a grant fromIDA, the World Bank’s fund for the world’s poorest countries, the SFD created a program for youth initiatives with local community participation. The RAWFD youth developed and carried out initiatives covering many areas; including awareness campaigns, community training programs on water and sanitation, personal hygiene awarnessduring the cholera outbreak in Yemen,re-forestation campaigns and the improvement of environments that surround their communities. Moreover, RAWFD youth continued their role as development ambassadors by encouraging communities to implement local initiatives through the training and establishment of development committees and village cooperative councils (VCCs) that are responsible for the implementation and supervision of various development programs. These include the critical SFD programs, “Cash for Work” and “Cash for Social Services” that are financed by the World Bank and other development partners.

During the period 2004-2017, the number of participants in the RAWFD program reached more than 6000, including 2700 female members (almost half the total number of participants), representing all governorates in Yemen and about 300 out of the 333 Yemeni districts. The names of these young people were added to the SFD databases to enable them to work as consultants or volunteers in their communities. The SFD also created a special tracking system to facilitate communication with them and identify the agencies with which they have been working. According to SFD databases, youth were given more than 150,000 working days in the various SFD projects. More than 700 graduates worked also in development projects carried out by international and local organizations.

Youth-led initiatives create an added value to developmental and humanitarian efforts which aim to relieve the plight of the poor and the internally displaced persons (IDPs). During 2017, for example, about 2000 RAWFD youth, including female members (45%), helped carry out more than 900 initiatives (in the areas of services, development and humanitarian assistance) through community cooperative efforts in more than 160 districts in 15 governorates, namely: Al-Mahra, Hadramaut, Taiz, Al-Hudaydah, Raymah, Saada, ‘Amran, Ibb, Hajjah, Socotra, Ma’rib, Sana’a, Dhmar, Al-Dhale, andAbyan governorates.

In major cities, RAWFD youth carry out small-scale communityprojects that contribute to helping the IDPs and the poor. For example, in cooperation with his fellow graduates, Wael Abdelrahman provided a water tank for a residential area in Dhmar governorates. In community initiatives, the youth regularly refill the water tank at no charge to the residents and the IDPs. In rural areas, the youth implement specific initiatives. Tahani - one of the RAWFD program’s female graduates and a resident of Al-Shallala village, in the ‘Ans district, Dhamar Governorate, tells how she cooperated with her colleagues to establish a literacy center in the village which is serving women from 27 families. Young people from Rauchi village, Hadibou district, Socotra Governorate, implemented an initiative that they developed to clean water sources and improve the environment. Other youth in the same district provide ceiling and roofing solutions for classrooms to improve the school environment for the children of their areas.

In Kamaran Island, Erakiya Abkar led an initiative for cleaning and improving the water source (a well) in her district. In Al Jouba district, Ma’rib Governorate, development advocate Saleh Haliman led an initiative for removing sand dunes that have accumulated on the asphalt road due to sand drifts. RAWFD youth in many districts of Taiz Governorate have carried out initiatives to repair school desks and chairs. In Taiz Governorate also, development advocate Ayman Mohamed (from al-Mawasit District) mobilized the local community to implement an initiative for the operational reform of the water project that has been at a standstill for many years.